The Mojave Preserve is far beyond the services we depend on in our daily lives. There are no stores. There is little potable water, no food, no restaurants, no available electricity, and no gasoline. You have to come prepared, and though we tried we failed and for a large part depended on the kindness of both friends and strangers, which we found in abundance.

On the way into the Preserve I texted my son to tell him we'd arrived safely. By the time we reached our campsite, 20 miles farther on, there was no reception. The next day the charge on my phone ran out and I was unable to take more photographs. It's probably just as well as photos fail to convey the beauty and grandeur of the preserve. For the next 36 hours I looked at everything and my eye began to tire of the endless pristine, so unused I was to seeing that kind of startling beauty for such a length of time. It heartened me to see vista after vista, one stacked after another; to know that there remain areas relatively untouched and uninhabited. It was as if I'd hiked into the past and caught a glimpse of what people who lived 400 hundred years ago might have seen. Of course it is different now, it is touched, but it is a glimpse, and it cleansed and heartened me.

I may as well have drawn the preserve on a paper grocery bag for how poor my camera was in capturing anything in front of me. The light was so harsh that I could not see anything on my screen and sometimes I wasn't sure my camera was even on. I kinda just pointed at things and hoped for the best. This was not a good strategy.

We were in the Preserve for the Desert Institute's Geology of the Mojave National Preserve with Ted Reeves. Ted Reeves is an amazing teacher. His enthusiasm is infectious and he is both accessible and personable. I was one of about 30 people in the group and though he didn't know my name he made an effort to check in a couple of times each day with some little personal question or comment and he seemed to do this with everyone, keeping everyone engaged in the subject matter. He seems to have a following of devoted students and I can see why.

On the first day we did a tour of the Rock Springs Loop Trail. It was a hot day and the sun beat down on us. We hiked past the rock house, previously inhabited by a WWI veteran and later the artist Carl Faber. Farther on we hiked along the top of a wash. There was loud buzzing up ahead. Bees were hovering around the opening in some rocks. It was a honey cave!

I'd read about those  when I was studying family histories and told my trail mates of massive honey caves I'd read about and how idiot settlers had dynamited them. Now that I'm back home I am able to find the story and share it with you. 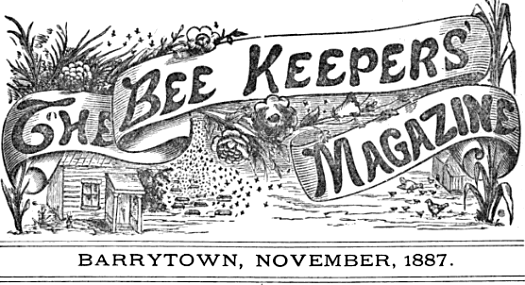 Honey By The Ton, in the November 1887 issue of Beekeeper Magazine, tells the tail of a man in New Jersey who stumbled upon a vast and multi-chambered honey cave. Instead of recognizing it for the natural wonder that it was - and he might have made more money making it a tourist attraction - he did what any thick-witted man with a hammer for an imagination would have done - gone for the short term profit and applied dynamite.

Read the entire story in all its sad stupidity, if you dare.

We remain fortunate that the honey cave on the Rock Springs Trail is protected.

Farther on we came to Rock Springs, the watering hole, now just a seep. The area was alive with bees and many of our party circled back to avoid them. The more intrepid of our party, and those of us more familiar and less afraid of bees, walked into the tree-lined canyon, rested in the shade and admired the many petroglyphs. Our Desert Institute volunteer (and neighbor) Bob told us that there used to be large pools in this section, but a flood had filled them in. 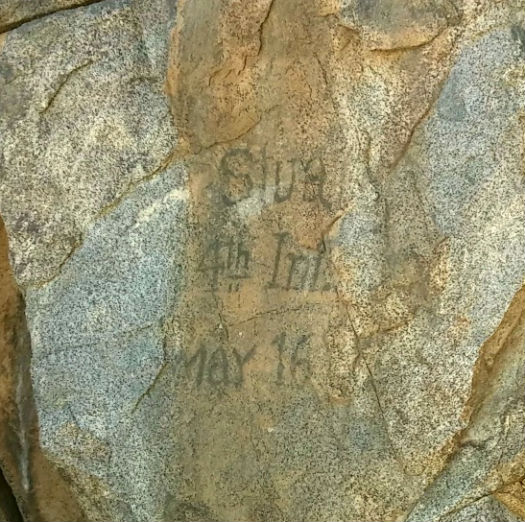 On one rock remains the grafitti "Stua, 4th Inf. May 16". In the article Mojave Preserve trail offers easy hike, cooler temperatures, the author writes, "I am told this was most likely written in either 1863 or 1864 by Charles Stuart, a musician in Company B, 4th Infantry, California Volunteers." I am charmed by the application of serifs in graffiti.

The Army built forts in the area to protect settlers and later the mail run. The fort at Rock Springs was supposed to have been one of the most dismal assignments in the whole of the army and many soldiers are said to have defected.

It's hard to imagine today someone becoming dispirited by the site. Living in a city like Los Angeles, or even someplace relatively undeveloped like Yucca Valley, or even the relatively undeveloped Twentynine Palms, would make any character not dependent on a personal cache of dynamite long for the silence and connection with nature that the Mojave Preserve provides.
Posted by Ken and Teresa at 9:09 AM