The landscape out here is big. Out in our desert boonies land is usually sold in five acre tracts, with even the smallest lots selling at an acre and a quarter. Some of this is arable or at least host to desert flora and fauna. But some of the land is just parched dirt and sand with rocks given to the imaginings of man in the form of labyrinths, medicine wheels, and other marks on the land.

My friend Laura Sibley just formed a labyrinth out by a little cabin she recently bought. 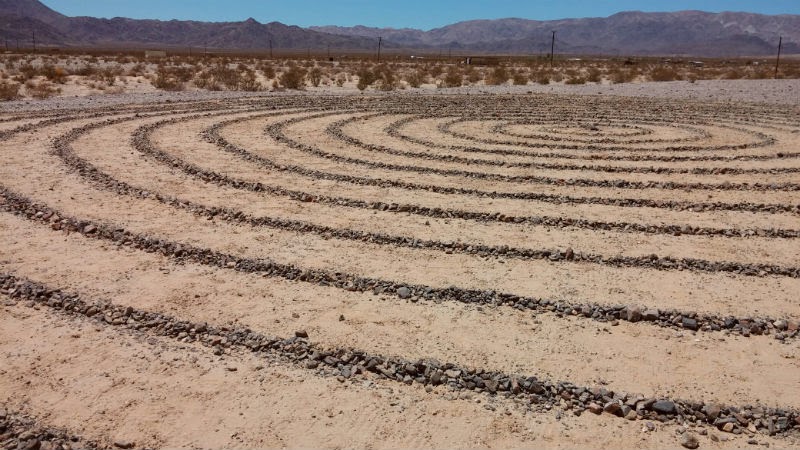 This one was hand-raked and is a spiral. Its form does not detract from the rugged beauty surrounding it. It seems that the plants did not extend into this area so I'm quite certain no plants were bladed. The borders are not high enough to prevent desert creatures from crossing the landscape.

Laura's labyrinth is beautiful and in a world that scoffs at walking this serves as a tribute. We walked about 200 feet from our car to get to the labyrinth and about half way there I stopped to make sure we had enough water. It was easily over 100 degrees and the heat flattened us. We sheltered in the shade of her cabin and took pictures. It would be an ordeal to walk this labyrinth in the heat and that fact confounds the stated purposes of labyrinths of reflection and meditation. The purpose of this one, at least at this time of year, would be of persistence and endurance.

I searched for other desert labyrinths and medicine wheels and found these:


This property - the Sanctuary - has two medicine wheels and a labyrinth.


I really like how this one, a spiral, forms a moiré pattern and becomes in essence a quartered medicine wheel. 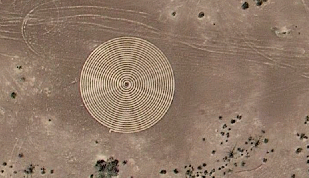 My dear friend Annelies has a beautiful medicine circle on her property and it was she who gave me the idea of building a medicine wheel rather than a labyrinth on our desert floor. I'm not sure yet. Labyrinths have a long European history, though originally Greek, so I wouldn't be appropriating anyone's culture but my own. I would need to study and to partner up with others to do a medicine wheel right, and it's too hot right now to study or partner on projects.

Plus, I have an aversion to messing with the landscape. When I first went camping and discovered that people were arranging and stacking rocks, I had fun with that. But I quickly realized my error and stopped doing it. Few come to the desert in search of the hand of man in the landscape. 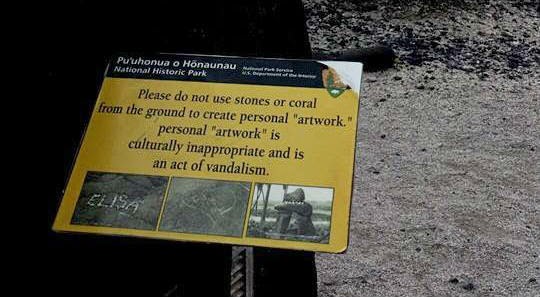 My friend Paloma De Los Angeles sent me this picture from Hawaii. Ignoring the slur against my peoples (Yes, I am descended from Vandals.) I do appreciate the sentiment.

But I have to admit that I don't have a problem with this configuration in Kendall Yards: 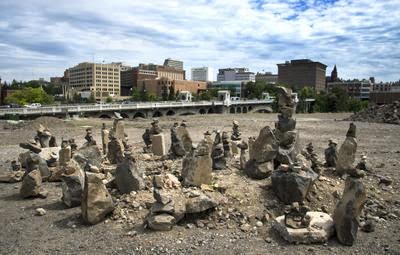 This space of true waste and abandonment cries out for the hand of man, for a shadow of humanity. That bridge traverses the lower Spokane Falls, a former gathering spot for native peoples. This is Kendall Yards, a development in Spokane, Washington. Their slogan is, "Urban by Nature." What an amazing slogan to describe the mystifying effects of gentrification and an extraction economy! And here peoples unknown have humanized the destruction of nature and the negation of man by building a small, mystifying, and a little bit spooky, response. Yes, we want to see the hand of man here, not just the invisible claw of a corporation manufacturing and filling need.

I'm hoping that by the time the temperature drops in October I will have worked out some of these issues and come to a resolution. At least in October it will be cool enough to walk Laura's beautiful labyrinth and see for myself what it means for these marks to exist in the landscape.
Posted by Ken and Teresa at 10:19 AM