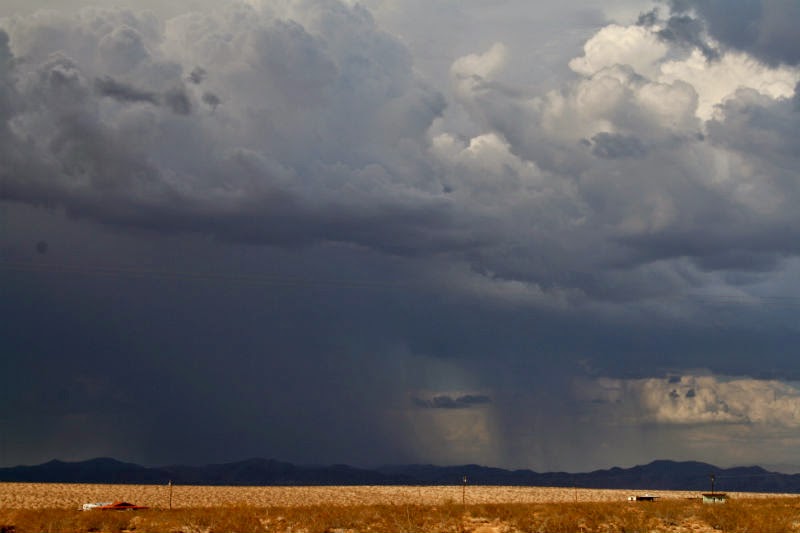 Friday night Kip set up a movie screen outside the Copper Mountain Mesa Community Center, out back against the 40' cargo container near the abandoned baseball diamond. Four of us sat there in lawn chairs, drank hard cider and watched the 1953 movie INFERNO, with Robert Ryan. 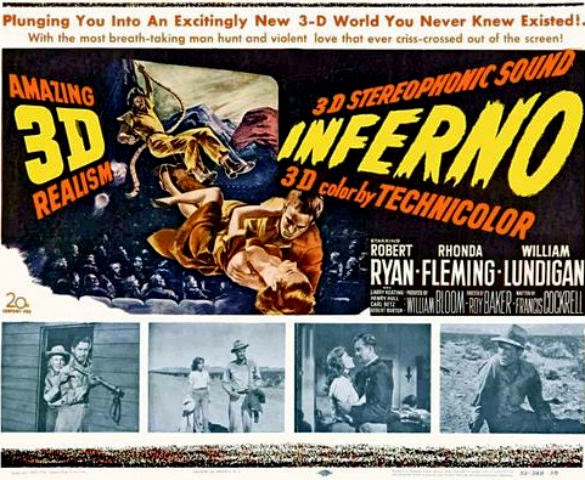 INFERNO is a movie about desert survival, and though we weren't watching it in 3D watching it in the same environment being depicted made it all the more real. We were under a sky dark enough to see the Milky Way amid the stars and a warm desert breeze swirled around us, as if in apology for the punishing heat of the day. Above the distant hills heat lightening flashed among the clouds.

I prefer the cold to the heat. I don't like heat and was worried how I'd survive out here in the summers. I did panic for a moment on Friday morning when the temperature in Wonder Valley reached 112. Ken brought me water and a big hunk of ice which I rubbed over my head and neck and arms to cool down. It made me appreciate the Copper Mountain Mesa's breezy 90s. Still, as days go by this kind of heat wears on one and even the local desert rats were a little ragged and complaining.

On Saturday afternoon I was napping in the cabin when Ken called me out to hear the thunder. There was a storm somewhere between Highway 62 and the mesa and we could see the rain falling hard. A few minutes later it started pattering on our tin porch roof. Then it started pounding. 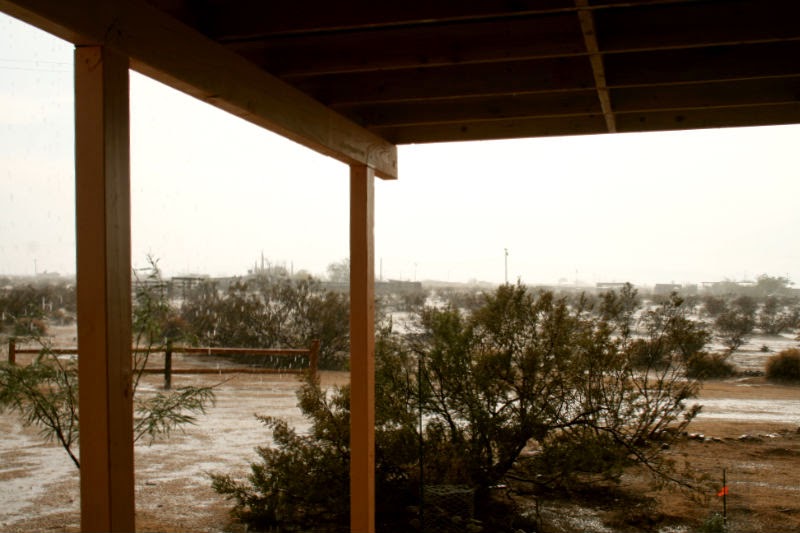 It was a spectacular sight to see and brought to mind the furies. It was excessive. It was difficult for my mind to piece together two such disparate elements - the arid forest and water, which made it all the more wonderful to see.

The rain continued for about an hour, with lightening flashing and thunder cracking. Then hail the size of ceci beans. We kept waiting for the stringers and washes to run but only toward the end of the storm did enough water accumulate for this to happen.  We'd argued since the spring about which way the washes ran, whether the flat landscape tilted one way or the other. Our guesses were wrong and what we learned really fast was that everything runs to the road. We marked the spots where we might build swales or dry pools to catch the water the next time. 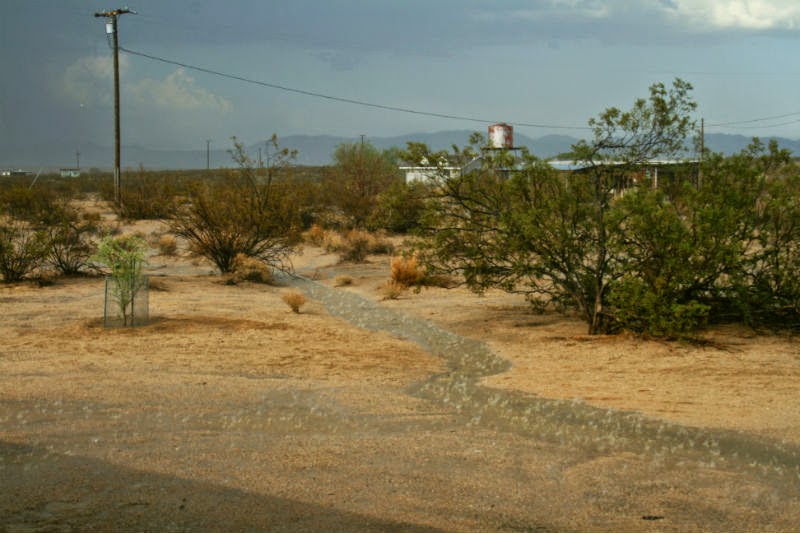 As the rain subsided I ran down our driveway through a stream of water about 3" deep, and followed it down to the road which had become impassible. I was barefoot and the cool water and shifting sand felt just like the beach. Our neighbor to the north met us at the street and we introduced ourselves and chatted. Some people keep to themselves out here and it took this kind of event to bring the three of us together.

We missed the Copper Mountain Mesa Community Association potluck which I heard was a little miserable without power to run the coolers.We also missed another neighbor's birthday party. We're still new to the desert and didn't want to risk getting the car stuck. (This introvert is glad to have two new excuses to add to the excuse list - "The power went out," and "the road washed out.")

The sun came out and the heat climbed quickly. Steam rose off the desert and the humidity joined with the temperature to knock us back inside the cabin, though it was only marginally cooler in there. When it cooled outside we came back out to the porches to watch the clouds and the sunset.

We have a little TV in the cabin and WIFI so we can get anything out here that we can get in the City, but we rarely watch it. We position and reposition our chairs to watch the clouds in the sky, or the play of the light on the land, or the Milky Way, or the satellites, or the Marines flying over in their helicopters, jets or ospreys. These are the dramas that hold our interest, that we have not tired.of.

Later in the evening the ground termites hatched and swarmed across the mesa in the millions. We did straggle over to our neighbor's party around 8:00 p.m. Everyone was annoyed by the termites until one of the kids suggested turning the lights on in the bathroom and turning all the other lights off. Out of the mouths of babes - problem solved and a much better party atmosphere.

The next day there were dragonflies everywhere, dispatching the last of the termites. I stood still in the driveway amid the dragonflies and listened to them frrip past my ears.

I want to say that we were blessed to be here when it stormed, but being an a nontheist I have trouble with the favoritism inherent in the word "bless." Still, how do I describe my wonder and happiness at being present? "Fortunate" doesn't fit, either, as it suggests luck and though luck had a part it was accompanied by other attributes. "Gratitutde" doesn't fit, as it fosters the ideas of debt and separateness. Perhaps as Americans we have no word to describe the deep and filling sensation of being one with nature, and perhaps that's the idea - to prevent us from even being able to describe what we're missing and instead throwing at us the shiny beads of blessings and gratitude, suggesting that the oneness we seek is not always there for us to have but something given by the state, corporation and church, something which must be paid for in gratitude, rather than claimed as a birthright.

So I'll say that this ability to be here in a place, to be one with a place and recognize the importance of that, has a deeply calming affect on me and the strength it brings me gets me through the days living in the City, moving amid - not sylph-like dragonflies - but a sea of possessions owned and those that will never be owned by me, though not for the lack of others trying to convince me of my need. 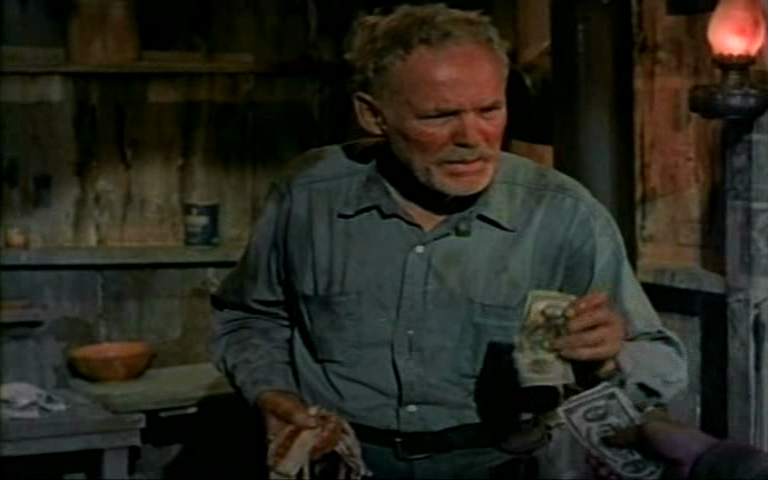 In the movie INFERNO Robert Ryan is eventually saved by Elby, an old desert rat. Ryan opens his wallet and pulls out a sheaf of bills. He smirks at how useless money was to him in the desert and offers the handful of bills to Elby. Elby looks at them and gingerly peels off one bill and tacks it to the wall. He says dispassionately, "It's handy if you happened to get to town."
Posted by Ken and Teresa at 7:19 AM