We were lucky enough to be here in Far North Joshua Tree yesterday when it rained. It had promised to rain for weeks, and yesterday the promise was fulfilled. Lightening, thunder, torrential rains, and hail. The hours before and after the rain brought out animals I hadn't seen before so before I describe the weather I want to write about the animals.

SHOVEL-NOSED SNAKE
First, I thought I saw a baby king snake - all white with black stripes. I'm always a little shocked when I see a snake - I can't quite believe what I'm seeing and often do a double take. This one was very small - maybe eight inches long and not moving. I thought perhaps it had had its head bitten off because I didn't really see one. That observation allowed me to later identify it as a full grown Mojave shovel-nosed snake.

SCORPION
This morning, in the loo, I moved one of the buckets and under it, in the moist sand, was a full-grown hairy scorpion - white and etiolated. We looked at each other, it turned and snuck out under the edge of the tent. Nature was calling and she didn't give a fig about scorpions.

GRASSHOPPERS
In the evening the larrea (creosote) trees turn on with a cricket-like sound. I've searched for the source of the sound and until last night had not found it. But last night one of the creatures moved and I saw it - a perfectly camouflaged green bush grasshopper (Bootettix argentatus). It was most impossible to see and I only saw it because it moved.

WALKING STICK
Also in the loo. I picked it up and immediately regretted it as I thought I'd killed it. I found out later that it was playing dead. 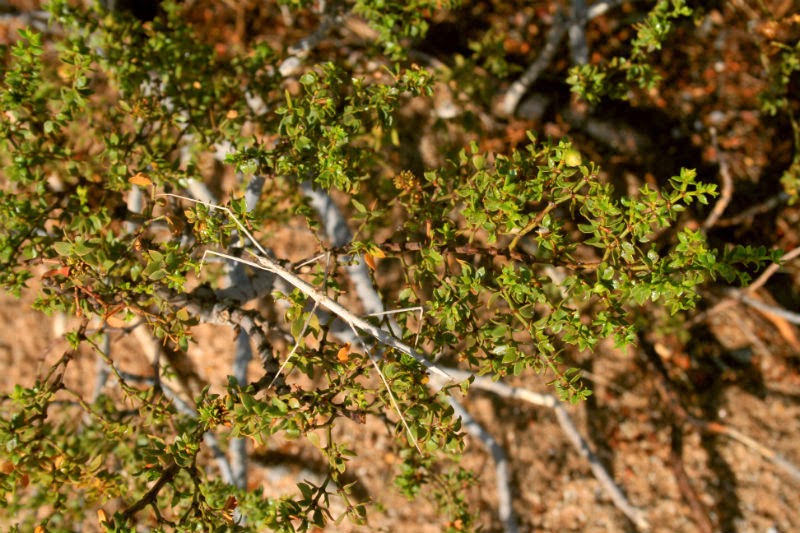 MYSTERY EGG
I found this on a creosote bush and got some help from BugGuide.net: a reader there says it looks like a mantid ootheca. I'll try to get a closer shot next week, if it's still there. 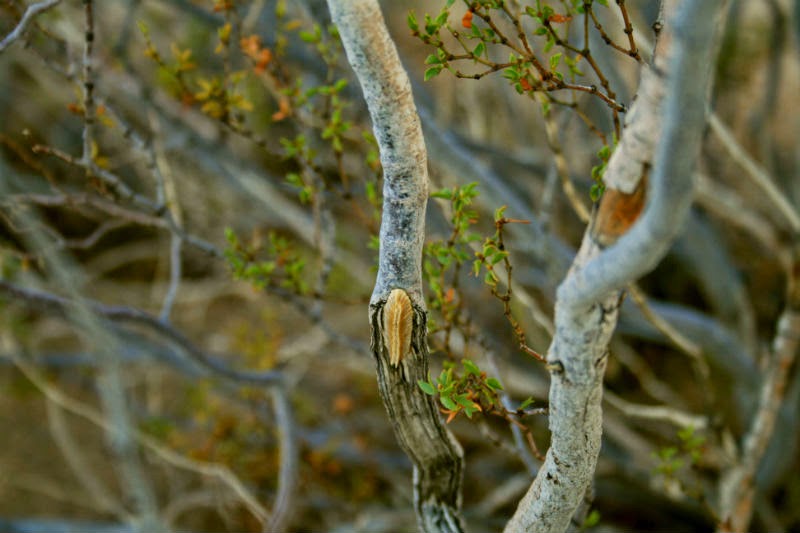