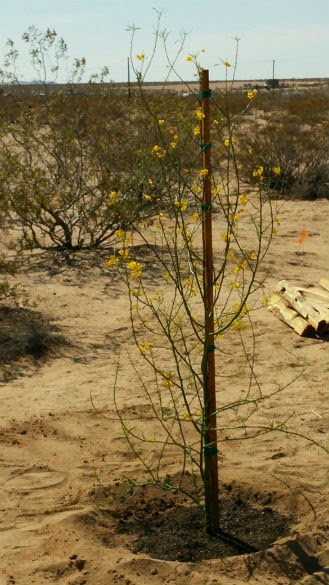 We now have 12 trees at Saturn Sands. (See the list below.) We decided to splurge last weekend and buy a few larger trees in 5 gallon pots at Cactus Mart in Morongo Valley. We bought a palo verde, a mesquite and an ironwood - all previously on our list, and with which we fell in love immediately.

Before we put the palo verde in the ground a host of bees descended upon its flowers, but not the usual honeybees. These were a slightly larger, sort of olive drab bee that I later recognized as centris pallida, a digger bee.

We had rented a truck for this weekend's errands. We drove to 29 Palms to pick up the metal base for the cast iron sink we bought from our neighbors. Later in the day we drove to Builder's Supply in Yucca Valley and bought lumber, concrete and fasteners for a U-shaped enclosure/sun/wind block going up on the west side of the house. We'll put our outdoor propane shower there and our composting toilets - at least until we build a proper bath house. Then we'll take the panels off the enclosure and it will become a garden cage/green house.

After dropping off the load of wood, we drove back through Yucca to pick up the trees. We had planned to join our new friends Annelies and Jim at the fifth anniversary of the Glass Outhouse, but we were too pooped. So we met them instead the next morning for breakfast at the Palms and immediately regretted foregoing the party, from which everyone was recovering. We took some of Ken's ribs to the Palms with us, which he'd rubbed from his own recipe, and passed them out to Annelise and Jim, and the Sibleys. I introduced myself to the woman sitting next to me who happened to be Laurel, who owns the Glass Outhouse and we gave her a rib, too. She was very inspiring and both Annelise and I promised ourselves we'd pull out artwork to submit in the fall. 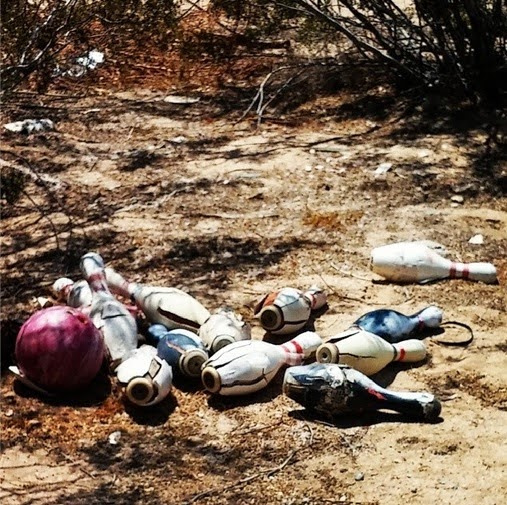 After breakfast Laura Sibley took us on a tour of their greenhouse. We walked through the patio, past the guillotine (there really IS one), the stage, the giant pinwheels, an abandoned outdoor bowling graveyard and finally arrived at the fiberglass greenhouse and the goats.

After that Ken and Annelies walked over to Wonderland Books across the street while Jim and I waited in the bar. Annelies donated a copy of her book, Kenya Cowgirl, to the store. She gave me a copy recently because I couldn't afford to buy it at Amazon, where it sells for $2,420.43. Go figure!

It was an amazing morning. I love my new friends. What I think I love most about living in the desert are the endless possibilities. No one out here says no. They're all, "Go for it! Try it!" and "How can I help?" 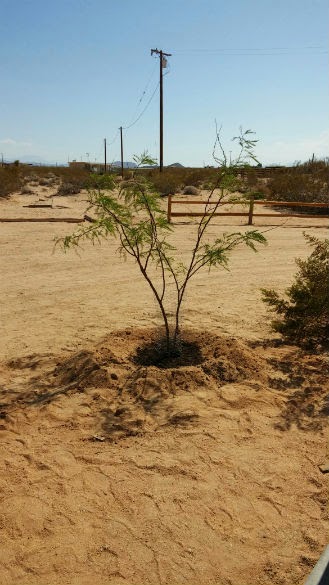 Trees we want to plant in the fall.
Big Shade - Canopy
Edible
For the hell of it