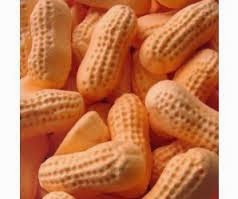 We went to Far North Joshua Tree for the Memorial Day weekend - three nights and lots of work. The contractors built the roofs over the patios and the wood needed to be primed. I'd picked a bright orange - poppy glow, and tested it on a window frame. We asked them to tint the primer at Home Depot and then ended up loving that color so much that we switched to it. It's a much mellower orange, kind of like those weird marshmallow peanuts my grandma used to always have on hand. I never would have selected it - it looks kind of bland, the kind of color the landlord paints the building by mixing all his various paints together.

But it ended up looking really good - it blends with the sand really well and doesn't conflict with the scenery. 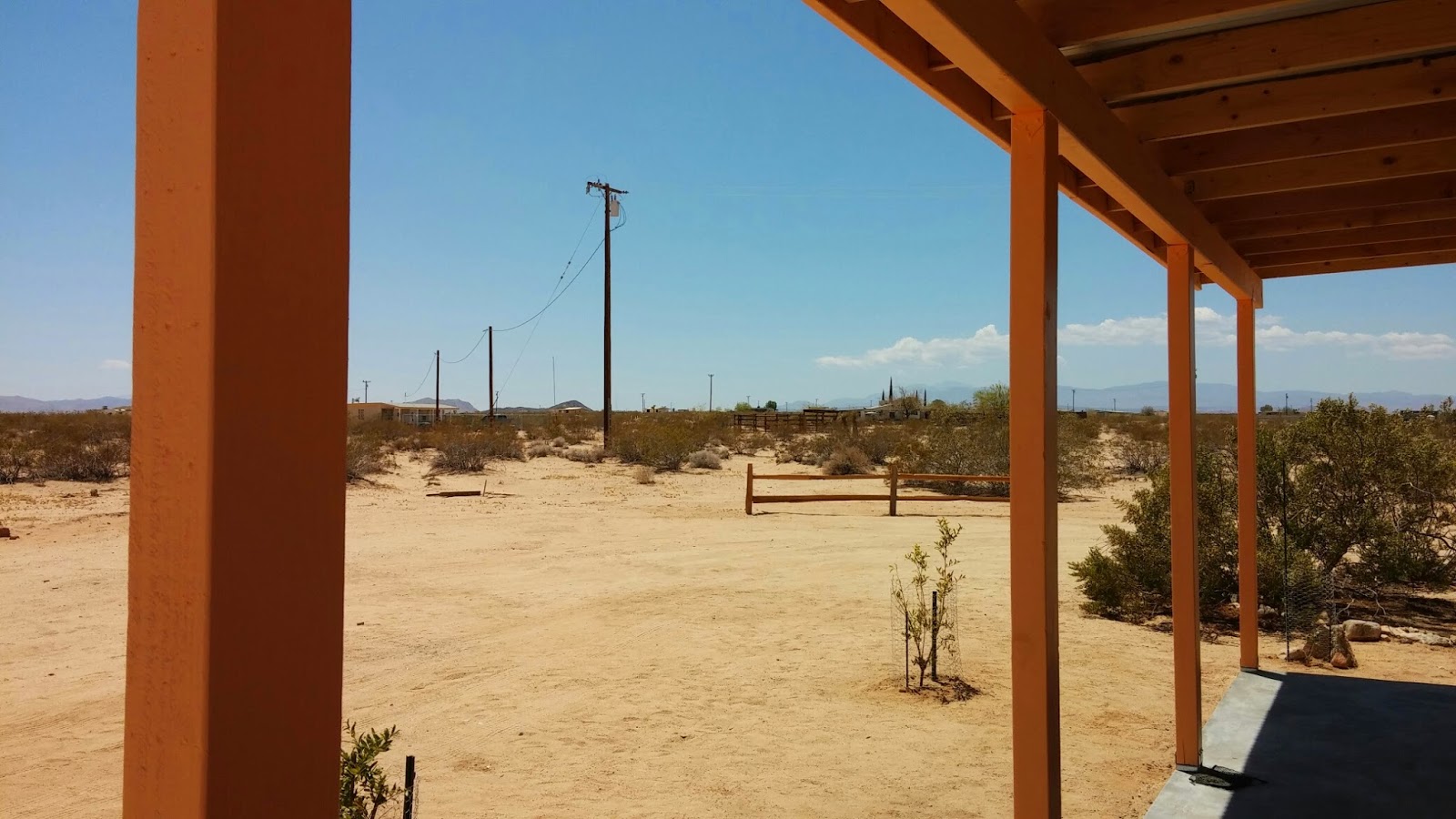 The camera makes the orange look brighter than it is. Here's the south porch. 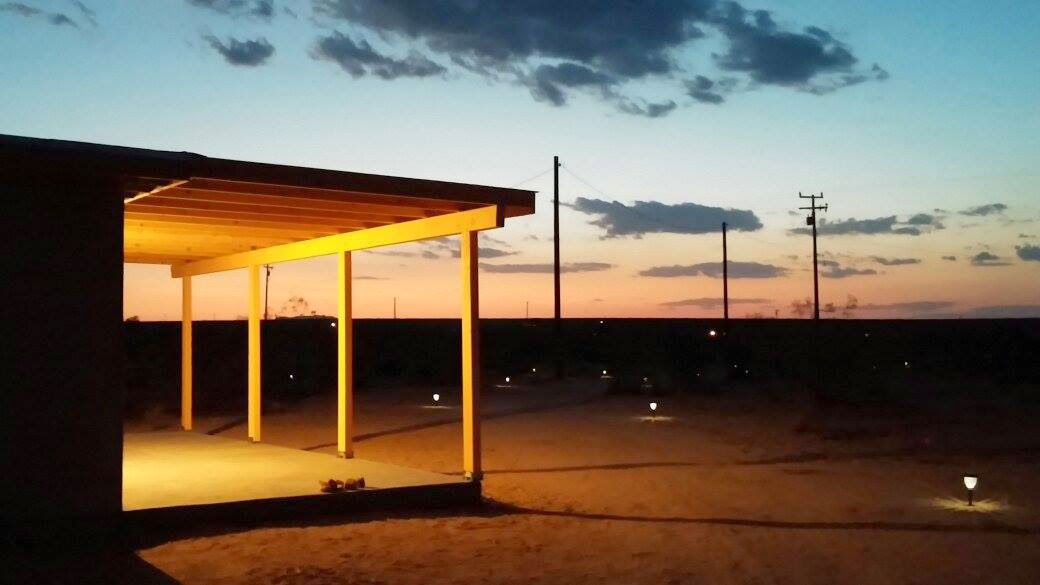 And here's the north porch at sunset. I think we chose the perfect color.

It was a hot weekend and we only did a little painting each day. Today was hotter than the previous two days - 98 degrees - about 85 inside. I don't know why but I couldn't shake the heat and felt pretty miserable.

Still, feeling really good about what we did.
Posted by Ken and Teresa at 6:39 PM

When the wifi goes out, which is almost always (FlashByte), in the Far North Joshua Tree, I read Edward Abbey.


Essay by Edward Abbey "I Loved it...I Loved it All" from Ned Judge on Vimeo.

Thank you, Greenfriar.
Posted by Ken and Teresa at 9:41 AM


Ken set up the video camera to catch the sunrise on Saturday. Usually I'm up in time to see Venus rise and make a cup of coffee before the sun comes up. This Saturday, for some reason, I stayed asleep. I do sleep better out here. Perhaps it's the penetrating silence and the solitude.

I love this video, but wish I could slow it down a bit.

Time is different in the desert. It mostly slows down. It reminds me of my favorite joke:


A city slicker drives through the countryside and witnesses an unusual sight. He stops. A country bumpkin is holding a pig up to an apple tree so the pig can eat the apples. The slicker says to the bumpkin, "Think of all the time that would be saved if you shook the tree and let the pig eat the apples off the ground." The bumpkin replies, "What's time to a pig?"

Living among thousands-of-years-old Larrea trees(creosote) while planting whisper thin 8" desert trees gives time an unreal quality, and isn't that a more appropriate way to view time? As unreal? For instance, would we even need time if we didn't have money? While time is traditionally measured against distance, in our day-to-day lives it's measured against money. How much money do you need to live each month? How many kilowatt hours are you charged? How much are you paid in an hour or a month?

And does not this time/dollar continuum prevent us from experiencing many things? I'm convinced that ghosts are those who have managed to seep through the chinks in our construct of time. Consider this verse in the book of Hebrews in the Bible.


"Wherefore seeing we also are compassed about with so great a cloud of witnesses, let us lay aside every weight, and the sin which doth so easily beset us, and let us run with patience the race that is set before us." Hebrews 12:1

How differently would we treat the land and our world if time eroded and we felt we shared space with a great cloud of witnesses, with the elders who so carefully tended the places we live? if we looked for their approval of our actions instead of  looking to the man pays us by the hour or month? Would we not more easily see that we ourselves are colonized, as they eventually were, every waking moment of every single day?


"The first thing the missionaries in the early times had to do was to force the Indians to leave their scattered ranches and form a pueblo. To make a place a pueblo they had to build a church. The Indians were pressed into service to erect the building, and kept at work, if necessary, by a troop of soldiers who often accompanied the missionaries and in this way assisted them in spreading the gospel."

Indigenous peoples were forced off their land where they were relatively self-sufficient and made into consumers who traded time for money so they could buy what they needed. It took soldiers and missionaries and the church with its bells ringing the hours and its alternating threats and promises to beat into people the equation "Time is Money," when they had little need for either. 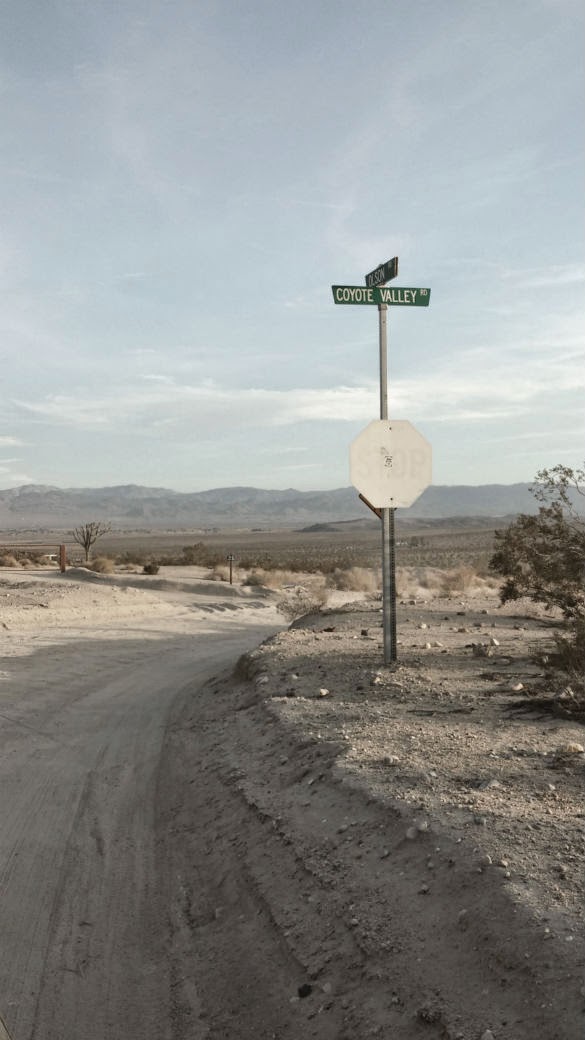 The high desert sun eats the color red for breakfast.
Posted by Ken and Teresa at 7:27 AM

Last week I had a little get together to drink margaritas and celebrate Mother's Day and invited our neigbors - Michael and Denise and Annelies and James. Annelies writes a weekly column in the Hi-Desert Star, and though it's not the Nob Hill Gazette or Palm Beach Galas, I felt we'd made the local social register when I saw this week's headline, "Mother's Day means margarita party at Saturn Sands cabin." 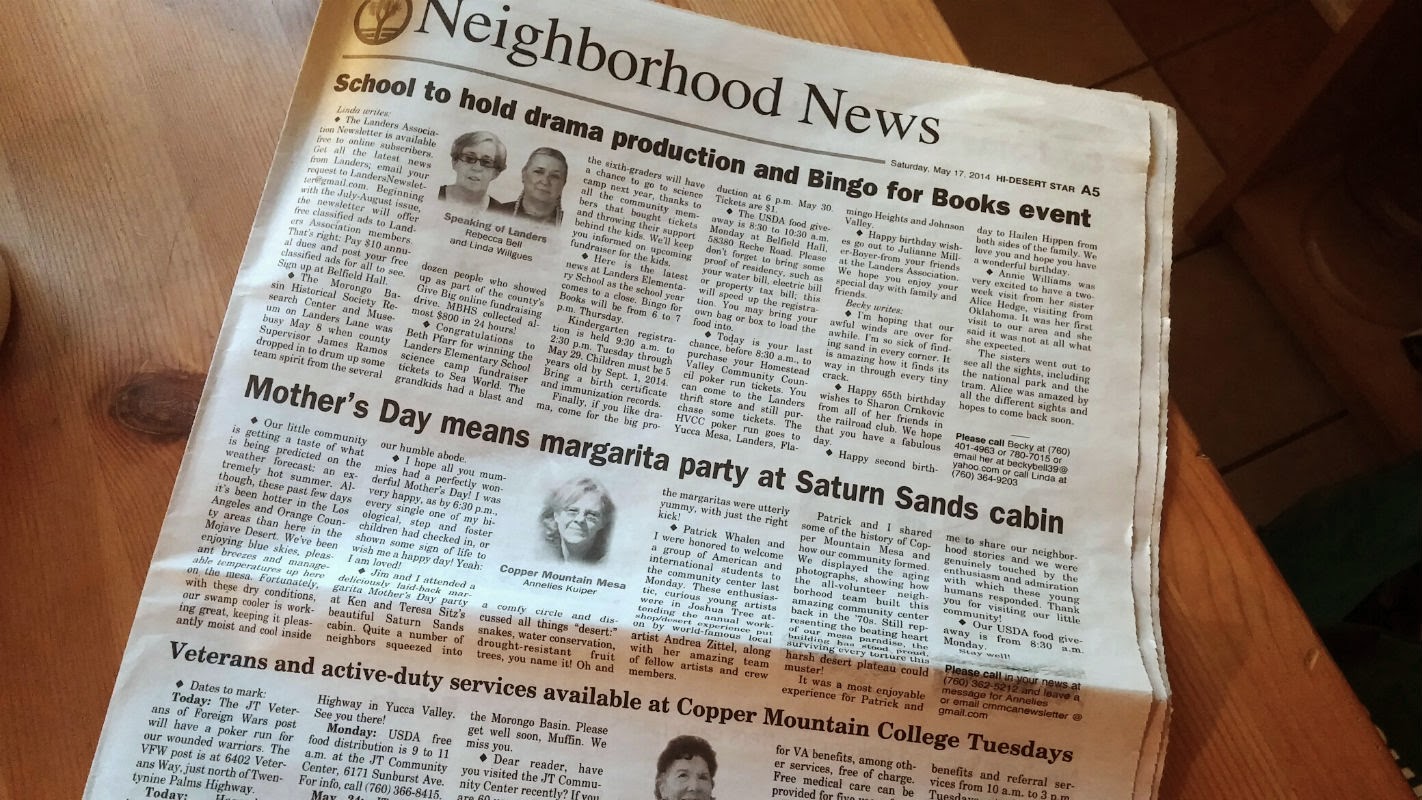 I just ADORE Annelise (said in best Lovie Howell Long-Island lockjaw voice), and can't wait to read her book. She's promised me a copy and that's good because I can't afford to buy a copy at Amazon where a new copy of Kenya Cowgirl sells for $2,420.43. Yikes!

I adore all our neighbors. How lucky to live some place so remote and yet have such wonderful people nearby. 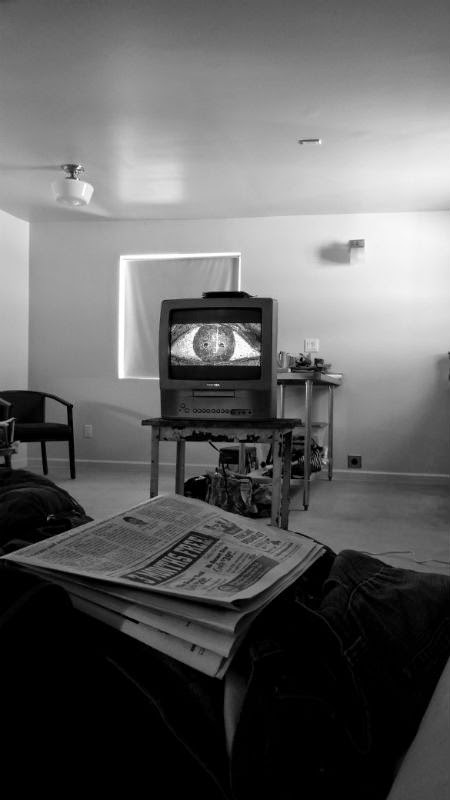 Between margaritas Annelise asked me how I thought I'd handle the summer heat in the desert. I told her I was worried because I don't care for heat - I much prefer the cold. She gave me several tips and promised that the temperature rarely tops 100 degrees. Was she telling the truth slowly?

Last weekend the temperature got to 98 degrees outside but stayed steady at 86 degrees inside. We've done almost everything we can to keep the cabin cooler. We insulated, we added a white roof, we installed double-paned windows and insulated doors, room-darkening blinds and we built porches, one to keep the sun off the south facing windows. The only think left is to build a wind/sun break on the west side of the cabin.

It was hot, but we kept the fans going, turned off the lights, napped and watched movies, and were fine. I can live with that much heat. It wasn't even bad sitting on the south porch around 5:00 p.m. Though still 98 degrees there was a dry breeze. Tolerable.

It's not that I don't want a swamp cooler or air conditioner but I think it would be kind of groovy if we could manage to do without, and honestly, I can't figure out where to put one and hate to cut a hole in our still pristine walls.

What do you think, my peoples? Can we survive a far north Joshua Tree summer without an electrical assist?
Posted by Ken and Teresa at 6:55 AM

What I learned on my mid-May vacation

Don't leave the interior lights on, and biscuits on the counter, when you go out to the drive-in at night. 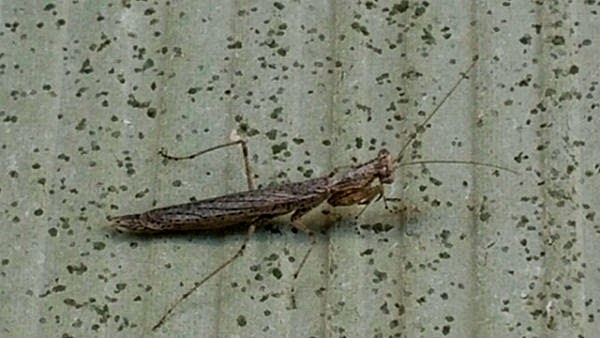 We came home and the food station (I'm still looking for a better word than "kitchen" for my non-kitchen kitchen) was crawling with ants and other creatures that I prefer to leave unidentified. My breakfast fix - Trader Joe lingonberry scones - was being appreciated by many. How did they get in? Our floorboards are sealed, our doors and windows are sealed, and yet our little cabin was teeming with uninvited visitors.

We threw out the food, =(, and turned off the interior lights. I tried to read my mail on my phone in bed but the flying bugs just followed me there so I went to sleep instead. 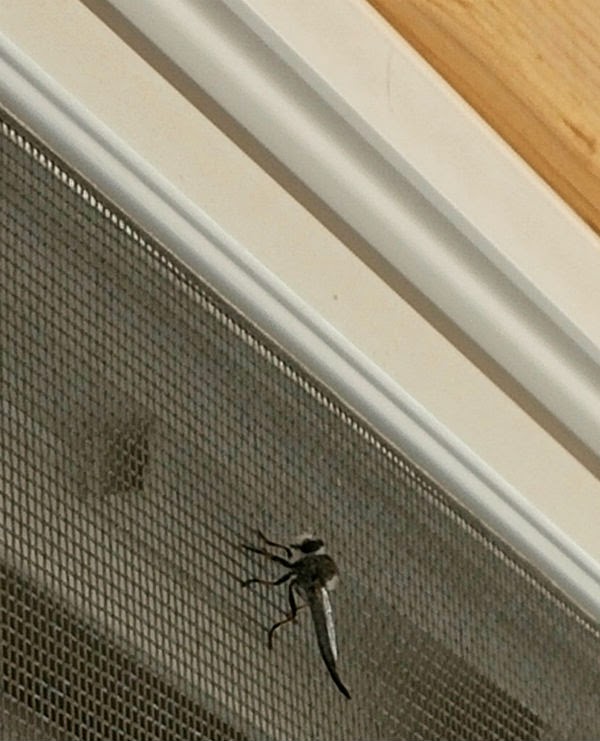 When I woke everyone was gone and I drank my bitter coffee with nothing sweet to chase it.

The theme this weekend was insects. I saw two grasshoppers - one with only one leg, but beautiful in white/gray/brown desert camo. Ken found and pointed out a desert praying mantis. It was about an inch long and similarly camouflaged. Saturday morning a robber fly was clinging to our window screen, and though not an insect we saw another larger white scorpion on our porch at dawn. It was about an inch long and ran away fast. 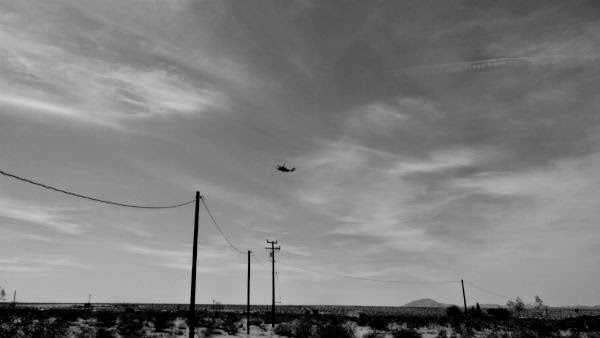 What's in a name? 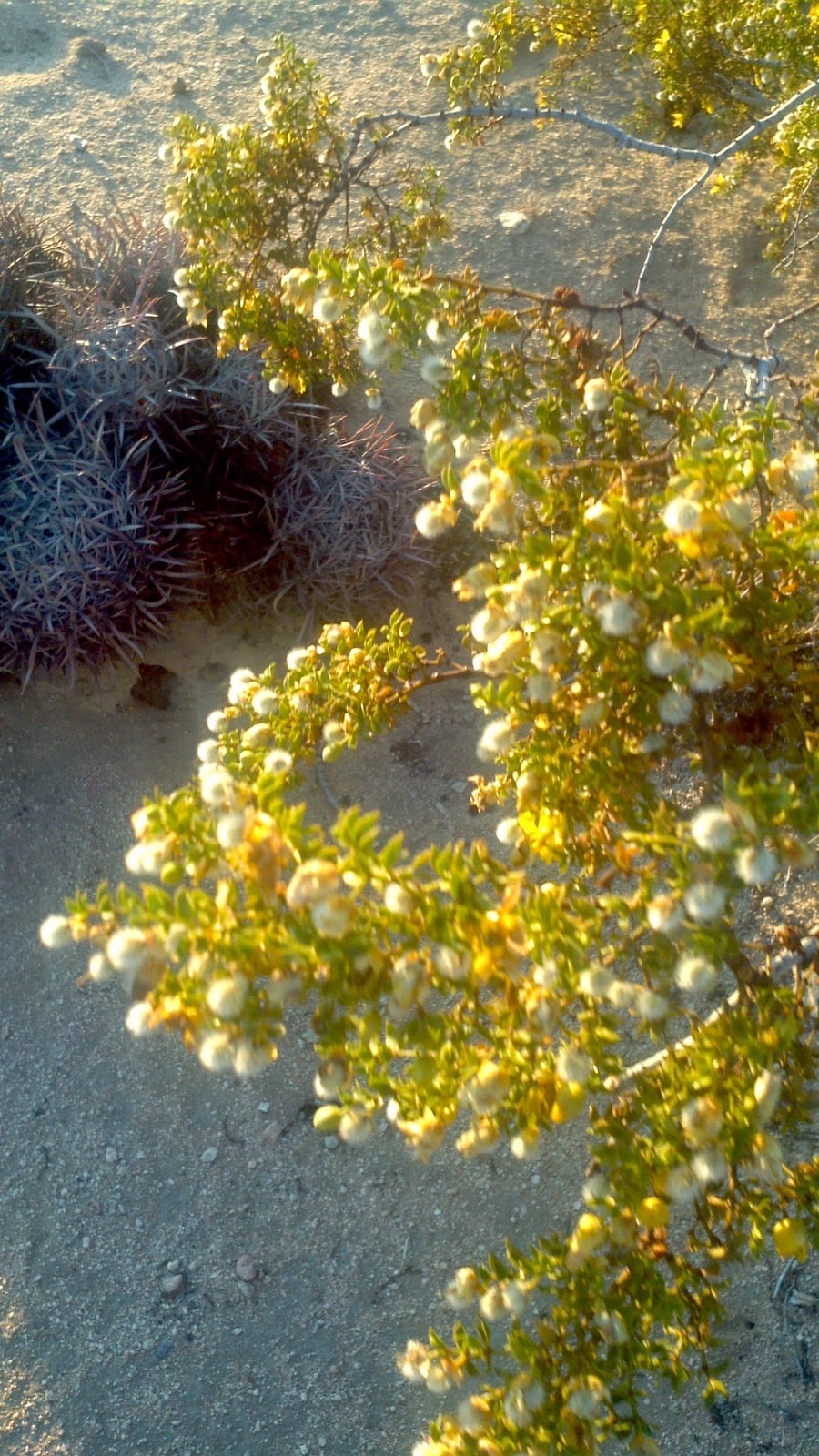 If you've read my previous posts you know that I hate that the common name for Larrea Tridentata is "creosote bush." Creosote is the byproduct of the distillation of tar. Someone in the past thought that the bush smelled like creosote and the name stuck, though I believe many more people think it smells like rain.

So for awhile I've been calling it Larrea. It was named thus after Don Juan Hernández Pérez de Larrea, a Catholic bishop (Spain) and botanist. Though it's unclear if the Bishop traveled to North America the Spanish missions in California were no friend to the indigenous peoples of the Morongo Valley. For that reason I'm hesitant to hew to the name Larrea for this important plant.

In my quest for a better name I wrote to the Salt River Pima-Maricopa Indian Community. I had read a creation myth attributed to the Pima which featured the creosote bush and thought that they must have a name for it. Elaina Fay Osife replied and told me the word I was looking for was "...“shoegoi” pronounced (sho’goi) or (shoe-goy)."

I've also written to the Agua Caliente Band of Cahuilla Indians but have not received a reply.

It seems if we are to engender respect and even love for this plant it's important to refer to it respectfully and to associate it with peoples that first named it and loved it best.
Posted by Ken and Teresa at 7:02 AM