Still, it's pretty darn quiet. Because our cabin isn't finished inside we stayed last weekend at a vacation rental in Wonder Valley. It was nice, but sandwiched between two highways - Amboy Road and Highway 62. A single car speeding through the night, a couple of miles away, sliced through the silence like a chainsaw. It made me appreciate the miles of bone-shaking dirt roads we travel to our cabin, roads that put us out of earshot of highway travel.

We walked over to an abandoned, adjacent property and poked around. A neighbor, Gloria, ambled over and introduced herself. She wore a multi-colored hat, faded by the sun. She's lived here for a year and told us about relocating a tarantula that had taken up residence in her home.

On the way to the cabin on Saturday we stopped at the Farmer's Market and a local thrift store where we bought two comfy side chairs for $20 each. We've decided to start moving in, even though the inside isn't finished yet. We want to be here now. I'll set up a "kitchen" outside by the water spigot. Ken can set up the hibachi nearby. 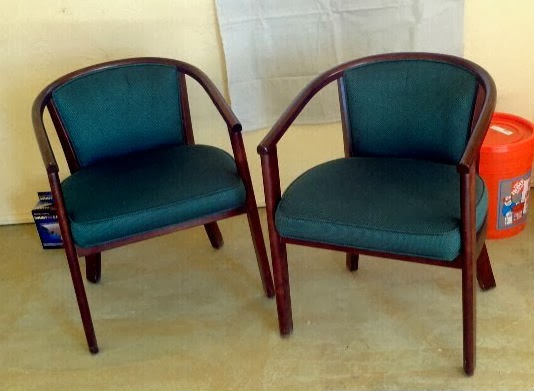 We've already started planting - 2 desert brooms, a salt bush, a caliandra (fairy duster) and 4 apricot mallows. It seems the bunnies have gotten to the mallows, but missed the mature one in the wash. I gathered some wild datura seeds along the old Red Car Line in LA, soaked them in paper towels and planted them within the giant paisley-shaped driveway that surrounds our cabin. The seeds were starting to sprout so I'm very much looking forward to seeing them grow. The 2-1/2 acres our cabin sits on bears signs of being disturbed by humans and is peppered with garbage. It will be a big job to pick everything up. It will be a bigger job to diversify the plant life but it is something we very much want to do.

As far as wildlife, we've seen only crows, pigeons, house finches and kestrals. It's early February. I can't wait to see spiders and scorpions and snakes and lizards and rabbits and tortoises. All in due time.
Posted by Ken and Teresa at 9:03 AM